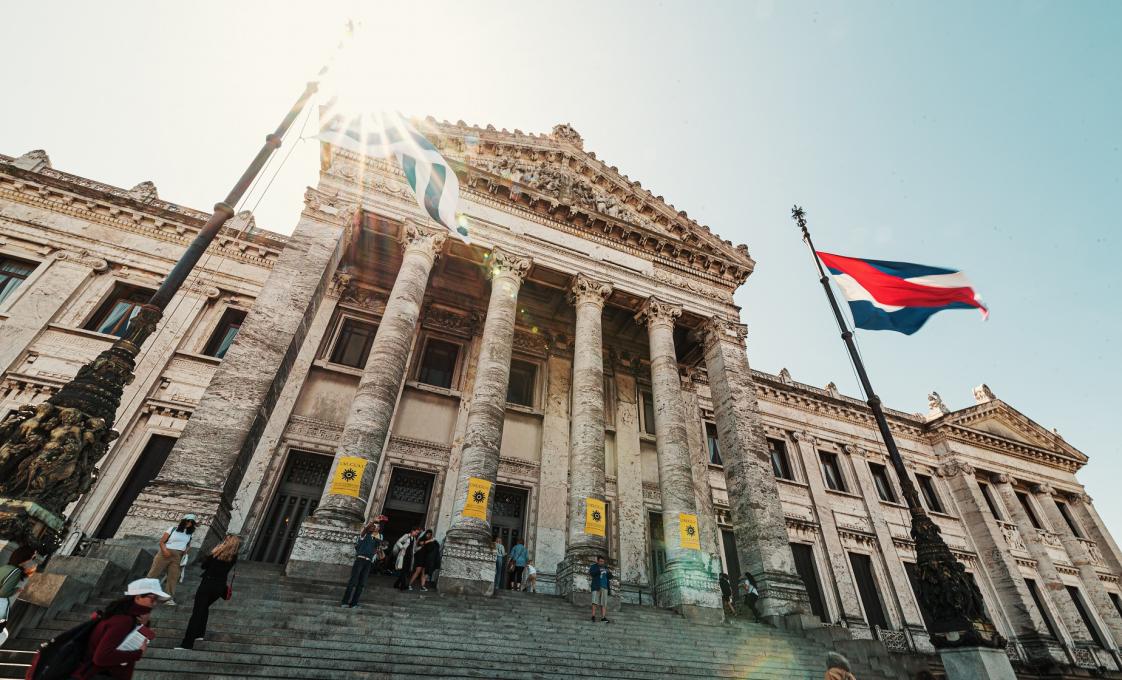 See the highlights of Montevideo including La Carreta, Pocitos Beach, Estadio Centenario and more during this brief city tour.

Experience personal attention, away from the large group tours offered by the cruise lines, when you book the Highlights of Montevideo City tour. This comprehensive tour includes visiting the Old Town (Ciudad Vieja), Port Market, Parliament Palace and much more.

Begin directly at the pier and board your comfortable, air-conditioned vehicle and be provided with excellent local, knowledgeable guides. The eclectic city of Montevideo is also the capital of Uruguay and the 8th city on the 2013 MasterCard Global Destination Cities Index for Latin America.

Your first stop is in the historic Old Town, where you can view beautiful buildings from colonial times. The old part of the town is held by Spanish military fortifications whose stone walls set the boundaries of the fortified San Felipe y Santiago city by the guarded fortress named Ciudadela. See also the Solis Theatre, The Cabildo, the Metropolitan Cathedral, the Museo Torres Garcia and other museums. There are also many galleries, cafes and antique shops in the area.

Next you will see Plaza Independencia (Independence Square) close to the city center. On this square you will see the statue and the Mausoleum of General Artigas, a Uruguayan national hero. Also view the Presidential offices, Palacio Estevez, Palacio Salvo and the Ciudadela Gate. Continuing you will see the Parliament Palace, inaugurated in 1925. The symbolism and neoclassical architectural style represents the democratic values of the country.

From the Parliament area, you will take a scenic ride to Mercado Agricola Montevideo (MAM), one of the last iron-built markets in the Montevideo. What began as a humble fruit and vegetable stand in 1913 has since expanded twice into a shopping mall a city block in length offering a variety of goods. You will find today there are still vendors selling fresh fruits and vegetables. In 2006 the building was refurbished and helped to revitalize the entire neighborhood.

After your introduction to some of the history of Montevideo you will next travel to the Obelisco De Los Constituyentes. This bronze and granite obelisk was inaugurated in 1938 as a tribute to the writers of the nation's first constitution, dating to 1830. The sculptor of this work of art is the famous Jose Luis Zorrilla de San Martin.

Continue to the area named Parque Batlle, or Battle Park, where you can stroll through the largest public park and green space in the city. While here, pause at La Carreta, a stunning bronze monument depicting oxen pulling a covered wagon that was created in 1934 by Jose Belloni. Next to the monument you will also see the famous Estadio Centenario, the soccer stadium inaugurated in 1930 for the World Cup in which Uruguay was victorious. On July 18, 1983 it was declared by FIFA as a World Football Historical Monument, being the only construction of its kind in the world.

Make your way to the beautiful sands of Pocitos Beach and pose for a photo at the Montevideo sign. Admire the picturesque view from here as you look upon Pocitos Bay.

Make a stop for a brief look at the Port Market, (Mercado del Puerto) and admire the iron structure that was built in Liverpool. At present, this area is one of the most typical gastronomic centers of the city where locals and visitors can taste the delicious Uruguayan meat which is cooked on the big barbecues. A great number of artists also perform in the surrounding area turning the streets into large theaters. Return along the River Plate enjoying city views back to port area and your ship.

This tour is perfect for those who are short on time but want to gain a great overview of the city. Reserve your seat on this special tour today.

We are experts in providing exceptional shore excursions. We understand that in today's fast paced world, vacations have become an increasingly important way to relax, reconnect with family and friends, and experience new and interesting places. With this in mind, we provide the highest quality tours by performing extensive research, and detailed reviews. While other companies also offer excursions, we strongly believe our expertise and approach set us apart. The large cruise lines sell shore excursions - typically in very large groups visiting high traffic sites. We focus on smaller groups visiting more interesting and authentic locations using more personalized local operators. While the cruise lines are experts in delivering cruises, we are experts in delivering shore excursions.

Our Approach
We believe quality service is not only highly valued by customers, but ultimately leads to better experiences and higher satisfaction. Unlike the cruise lines and other tour companies that rely almost entirely on websites, we encourage customers to call us. We want to invest our time answering your questions, providing input, and selecting the excursions that best meet your needs.

Our Tours
Our goal is to provide customers a wide array of exciting, appealing, and enriching tours. For those customers who prefer to travel in smaller groups with more personalized service, we offer a wide variety of small group tours around the world. These tours generally range in size from 2-12 people compared to larger tours which can number up to 50 people. While exploring the destinations and ports on this website, feel free to search for these "Small Group Tours". For those customers interested in private tours, we offer many outstanding excursions that allow you to travel with your party alone and, in many cases, to fully customize your tour. Search for "Private Tours" if you are interested in this experience. Our "Scenic" tours provide up close and personal access to some of the most spectacular natural environments on Earth from majestic glaciers in Alaska to spectacular reefs in the Caribbean. Our "Cultural" tours allow customers to experience local customs, entertainment and culinary delights ranging from tribal dances in Alaska to an outstanding local meal in Santorini, Greece. Our "Active" tours offer a multitude of exciting and adventurous ways to experience our destinations. Our customers can kayak the turquoise waters of the Caribbean, hike to a spectacular waterfall in Hawaii, or bicycle through quaint villages in France. Our "City" tours allow travelers to see the highlights of great cities around the world with unique insights provided by our expert tour guides.

Our People
In our experience, exceptional travel experiences are almost always delivered by exceptional people. With that in mind, we utilize a comprehensive approach to select and employ the leading tour guides and tour providers around the globe. We hold our people to very high standards which we measure by our comprehensive Quality Control process and, most importantly, by our customer feedback, which we will actively seek from each of our customers.

Our Owners
Shore Excursions Group is owned by seasoned travel executives possessing extensive experience across many sectors within the travel industry.

Michael Bonner
Mr. Bonner has over a decade of experience working in the cruise industry in a variety of roles for both Royal Caribbean Cruises Ltd. and Viking River Cruises. Most recently, Mr. Bonner was the Chief Operating Officer for The Scholar Ship, a Royal Caribbean program aimed at providing college students onboard educational programs in conjunction with enriching shore excursions around the world. Mr. Bonner also helped co-manage Viking River Cruises U.S. Operations, and he ran the corporate, strategic, and deployment planning functions at Royal Caribbean. While at Royal Caribbean, Mr. Bonner was responsible for forming Royal Celebrity Tours, Royal Caribbean's land-based tour operation in Alaska, which takes cruise passengers on multiple day tours through the interior of Alaska either before or after their cruises. Prior to working at Royal Caribbean, Mr. Bonner was a consultant for Booz Allen & Hamilton.
Less
from $55.00 (USD)
Per Person
Contact Us
Tour Type
Group
Group Size
Standard
Activity Type(s)
Cultural, Scenic
Tour Duration
3 Hours
Activity Level
Easy
Tour Leaves From
Cruise Ship Pier
Food/Beverage Provided
None
Special Instructions
We recommend wearing comfortable, weather appropriate clothing and walking shoes.
Restrictions
Guests must be able to get in and out of the transportation. This tour can accommodate a collapsible wheelchair.
Terms & Disclaimers